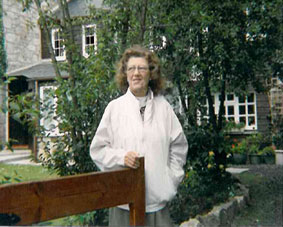 “Can you tell me who is around in spirit?” 

A lady with a name sounding like Ellen comes in on a mother link and she calls out for Allan on the Earth plane whom she is giving some healing to at the moment.

Ella is my Mothers Aunty who passed away approx 15 yrs ago. She lived with my mothers mother – (they were sisters) and were all very close – she has a son called Allen who is a sensitive soul.

She had a strong faith and says ‘thank you for everything. You did as much as you could have done “ don’t worry for not being able to be there at the end.”

Mum seems quite forceful about this as if she wants you to stop worrying and move on from the worry and guilt.

My mother was a very determined and loving lady. After her chemo treatment she was very frail and ill. I nursed her back to a point where she could eat properly and build her strength back.

She was very independent and did not like to ask anyone for anything.

When Mum was really ill again I was with my daughter overseas delivering her 1st baby.

I really wanted to be with Mum at the end but could not and it upset me very much. I missed her passing by 2 days.

Mum is pouring cups of tea, and trying to show me the union jack as an English connection. I can see rural areas around her and birds which she had a great affection for. She shows me that she had a lot of copper and brass bells around the home.

My mother, who lived in the UK, did have a great affection for birds and she would talk to me on the phone about the birds she could see.

Her home had a big open fire place which was adorned with copper and a brass bell that was my favourite as a child.

It feels as if mum’s passing is very recent after suffering from an infirmity which took her very quickly during the latter period. She talks about missing her husband who passed before her and meeting up with him in the spirit world. Mum has recently been talking in the spirit world with a Reg, George and a Lillian on her husband’s side. She gives me her name Lucy and repeats this in my ear as a double family name.

She was very ill after her Chemo and passed away within 1 week of being in hospital.

My Dad had died 10 yrs earlier and she missed him a lot. She wondered if he would come for her when it was time as his father did for him (in a dream she had)

Dad’s good friend George died 10 yrs before him. Lillian was his Mother’s sister and Reg was Lillian’s husband.

Mum mentions birthdays in March and April around you and talks about a grandchild who is able to see her in spirit.

As she comes around the home she notices the driveway renovations and talk about painting a room, brings flowers for an anniversary around you, and she shows me a rose bush of significance. Mum also mentions the loud bang that gave you a fright some time ago in the house and laughs that they heard it in the sprit world.

She mentions someone called David related to the family and talks about having to make the split.

My 2 daughters have birthdays in March and April and my grandchild often looks at the corner of the room as if in deep conversation with someone. We both think her great Nanny is there with her!!

We have just had a new driveway put in and are talking of painting the back room!!

The flowers were received for my anniversary from my partner.

The rose bush was a favourite of my dads and comes into flower at the anniversary of his passing! Mum treasured it and often talked about it.

The loud bang referred to was a door slamming shut at my Mums home when my brothers and I were clearing it and the valuer offered us a very low amount of money. My 2 brothers and I laughed and said Mum is not happy either.

It was a light and funny moment during a very sad time.

David is my ex husband who visited her whenever he was in the UK -we still keep in contact.

Dad comes in and makes his presence felt more mind to energy than mind to mind. He shows himself as a smoker, possibly with chest problems and talks about an operation in his latter years.

He moved to hospital and then back home again where he wanted to die.

He has met up with his mother with an ‘M’ sounding name, possibly Mary, and who hurt her hip at the end. Also he mentions Uncle Bill.

My father did not believe in the spirit world or religion, he was a very quiet man who often let my mother do the talking. It did not surprise me that he didn’t make contact directly but through my mum.

He was a smoker and coughed a lot.

He was in hospital towards the end and was angry about being there – he wanted to come home. A few weeks after returning home he passed.

His mother was called Mary and was unable to walk well due to hip problems. Uncle Bill was also a family member who has passed, dad was fond of him.

Mum comes back in at the end watching over the family. She shows me a picture of an eagle with some significance to someone in the family who needs a bit of healing.

Sending lots of love mum tells you that she will be around and always guiding.

I feel my mum watches over us all in her own quiet way, like she did when she was here in body.

The eagle I think represents a tattoo my eldest brother has recently had done. He is very spiritual but lost his way for awhile and suffered relationship problems. He did need healing and has renewed his Buddhist way of life and is more content now.

I am so glad she is there still guiding me – that is what made me so sad after her passing – I missed her and her wisdom.

Thank you Sunny for an excellent reading, for giving all the accurate names and details and for passing on the messages from mum. The reading has renewed me.