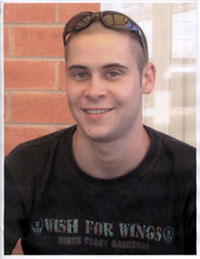 Grandfather comes from spirit and gives me the name Jim and also an Alfred. He shows me being sick in hospital. ‘I went down quickly at the end. There was something wrong with my blood and I was forgetful. Everything is back to normal now. I’ve met up with a whole heap of rellies in spirit including my sister Margaret.”

Grandfathers name was James *Jim Charles Alfred Ball*. His passing came very quick and he came to show the signs of Alzheimer’s, hence Sunny’s reference to being forgetful. His sister’s name was Margaret.

Grandad talks about problems with his knees, banging his head with a fall at the end, balance problems and having to use a walking frame. ‘Don’t need that anymore he laughs!”

He wishes to give healing to your eyes and also mentions the ‘prang’ a couple of years ago. Grandad loved reading books and has noticed the plants that you are putting around the pool area at your home.

He talks about December for a birthday and takes me back a few years for his passing.

Grandad did have to use a frame although he didn’t walk around much at the end. My eyes have been tired lately and yes I had a car accident a couple of years ago!

Also we are decorating our pool area and in the process of getting some new plants to put in!

Grandad shows me childhood memories of a farm and working in the city in adult life. He says ‘hi’ to the two male figures around you who are builders, possibly dad, and mentions birthdays in July.

He puts up the Union Jack and brings a connection to England while making me aware that someone lives at the house number 10.

He tells me that you have been misplacing things of late and mentions that there are spirit children around you.

Grandfather comes close to your younger brother and shows him as being darker haired and skinny, playing musical instruments, possibly drums, and busy studying with computers.

My dad (Jim’s son) is a carpenter and so is my Brother Cary (Jims Grandson) with birthdays in July.

We all were born in the UK (except mum) and moved to Australia 14 years ago and my Mum, Dad and Brother live in house number 10, just as Sunny said!!!

I have a habit of putting things where I swear I have put them and then 5 mins going back and they are no where to be found…only to be found a few hours/days later in the same spot where I’m sure i put them! hahah…spirit children playing tricks on me.

I have a younger brother who is exactly as Sunny described – he plays drums, and loves playing computers.

I have a tall male energy coming in from spirit who gives me the name Aaron. He brings me back a few years or more, relates to the age of 19 and shows me a trusted leather jacket while making me aware of a sudden passing on a motorbike. He puts up the month of July as a passing or anniversary of significance. I feel that he was good with his hands, fixing machinery or working with metal and says ‘thanks for the special times together. I am still around from time to time.’

Aaron liked water and says that he wants you to enjoy a boat trip coming up in your future.

Aaron was a past boyfriend of mine who suddenly passed away aged 19 from a motorbike accident in the month of July. He was a welder and loved making things with his hands and fixing things on his bike. Aaron loved the beach like me and loved swimming.

Me and my current fiancé are actually thinking about going on a boat trip and we have been talking about it so it is nice to know that Aaron is around from time to time!

Thanks Sunny for a great reading with so many details that you couldn’t have known to be true.