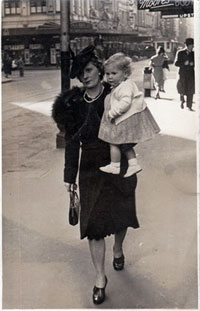 I have a man here today who clearly gives me the name Frank Price and tells me he is your father. He mentions Uncle George and Uncle Len that he knows in spirit. Dad puts his hand to his chest and mentions problems around this area. He talks about a problem with a leg and mobility at the end regarding a stroke condition. He was very hardworking and punctual. Since his passing he talks about visits to someone around you at the farm.

Spot on, Sunny to give my father’s full name.

Yes, punctuality should have been Dad’s middle name. He always said it was better to be an hour early rather than a minute late. I had forgotten that he had visited us at our farm until I found a photo of him there. He died following a stroke and certainly had limited mobility prior to his hospitalisation. ‘Uncle’ George was my mother’s stepfather and virtually my only father figure for the first seven years of my life. Uncle Len was a dearly loved uncle on my mother’s side of the family.

He takes me back into his life and mentions that the war affected him on many levels. He says ‘thank you for always understanding me.’ He mentions travelling around a lot interstate and not always being there for his family. He brings a memory of Sydney where you lived with mum.

I was into my teen years before I realized how the trauma of his war service had affected him. He had enlisted in the British Army and was one of the soldiers who had to swim for their lives at Dunkirk. My mother lived and worked in Sydney for a while during the war, while caring for my brother and myself.

Dad brings me into the 1990’s and says that a lady me up with him who I take to be your mother. She lived her life to the full, loved to party and was always busy showing me work as an industrial machinist and making wedding dresses. Mum is holding up a cup of tea and making reference to the union jack as a place of former residence. She mentions her birthday in November and says ‘happy birthday for April.’ She tells me that she has met up with a lady called Catherine in the spirit world that comes in on a grandmother link on the other side of the family.

Amazing – every single comment here is right on target!

Mum is smiling now in spirit and says that although there were problems with her blood at the end she died peacefully in her sleep. “I died on a Thursday and remember telling you that I was going to go on that day.”

She talks about muddling something up and that she used to go for a walk.

“Thanks for organising things in the last year or so. I know it wasn’t always easy for you.” Your mum is smiling as she makes me aware of her moving back and forth from a nursing home to your house and not being sure where she wanted to be.

Last minutes with mum were sitting with her as she admired the sunset from her hospital room. She died peacefully later on that night and yes, it was a Thursday. Even on her last days she would walk around the hospital socialising with anyone who was in the mood. When I would get muddled about something she loved to smile and tell me – “It gets worse!”

During her last years at the hostel she loved to visit us but would get somewhat bored and want to go back to the hostel. She would no sooner be back there than she would be on the ‘phone asking to be picked up for another visit. I recall losing it a bit on one occasion when she rang back the day after we had taken her home and telling her – “Mum, your bed here is still warm!”

Mum mentions the March birthday and a 2 and an 8 for someone else’s birthday.

She loved her jewellery, mentioning that the wind up box with the ballerina has been given to a grandchild, and she shows me a pearl necklace and clip on earrings.

Your brother has met up with her in spirit and he mentions someone called Kevin.

Mum is withdrawing her energies now but peaceful that she has had the opportunity to talk.

Again, spot on Sunny – my father’s birthday was in March and my husband’s is on the second of the eighth. If ‘punctuality ‘ was dad’s middle name, ‘jewellery’ could have been mum’s. She wouldn’t dream of going out without the earrings, necklaces and brooches and her wind-up jewellery box with the ballerina has now passed to one of her great-grandchildren. My brother passed away last year and his boyhood pal was named Kevin.

Thank you, Sunny, for the comfort and peace of mind which your reading has brought me. Such confirmation of life going on for those you love is very reassuring and encourages me to keep making the most of this earth-bound life while I am here.