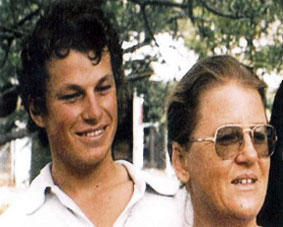 A man comes in from the spirit world, giving the name ‘Eric’ on a grandfatherly vibration. He talks about chest problems before his passing and brings your son in who gives me a connection to ‘David.’ He draws my mind back over 20 years for his passing and makes me aware of him being a young man in his twenties.

He mentions Jan for a birthday when you are always thinking of him and a passing around April/May as he is putting the 7th up in front of my eyes. Your son wants to say ‘hi’ to the brother still alive with the beard and to his 3 daughters, one of whom is involved in a separation at the moment.

Just after my reading with Sunny I had an appointment to talk to a relation of Eric who I had just found out was my maternal grandfather! David is my son who is in spirit and he did pass in his twenties as a result of a vehicle accident. His birthday was in January. He does have a living brother with a beard and 3 daughters.

Your son has a quiet energy but he is also trying to make me aware of a partner/wife whom he wants to say ‘thank you’ to for bringing him so many happy memories while alive and for helping him on an emotional level. Being practical and good at fixing things, he is making me aware of a motorbike, a sudden passing around an accident and talk of his heart giving way.

I had visited David’s widow prior to Sunny’s reading. He was a quiet thoughtful man and his death was caused by his aorta rupturing on impact after being knocked from his motorbike.

Your son is talking about a brother (possibly yours) whom he has met up with in the spirit world with the initial ‘A.’ A lovely man who brings back childhood memories of growing up on a farm with ducks and talks about meeting up with a lady connected to him with a ‘Ro’ sound to her name. Your brother had a sense of humour, loved fishing and laughs about an accident with a boat of his. He comes around in Nov for an anniversary. He talks about the year 83/84 possibly for a passing and being very close to you around this period.

Austin my brother is now also in spirit as is his wife Robyn. He owned a deep sea fishing boat, which later was lost at sea! He came and stayed with me in 84 while waiting for David’s funeral to take place and was a great help to me and to David’s widow. Austin was always close to me.

He is holding up a vest. Looks like the home made string variety and jokes ‘I am still wearing my vest!”

He has large hands, strong arms and makes me run my fingers through my hair, which was thinning at the end. I can sense smoking around him with an illness that prevented him from talking at the end. He shows me a passing 8 years ago and memories of dancing in his younger years. He loves you dearly and says hi to ‘Barbara.’ ‘I’ve also met up with old George in the spirit world.’

Your brother reminisces about working in a foundry where it was very hot in his younger years and mentions a daughter with the ‘P’ initial who has dark hair.

Austin had many vests including a snakeskin one, which might have looked like string. He was buried wearing a gaberdine work vest I had made for him. Sunny’s description of him at the end is so accurate!

Barbara is the wife of my bearded son, and they enjoyed many a joke together. George is our paternal grandfather. Austin did work for a time in a BHP steelworks where it was very hot and his daughter’s name starts with a ˜P!’

As an enabler spirit, Austin is trying to bring in another son who gives me the impression that he has been gone longer in spirit than your other boy. He shows me a connection to water and being told to slow down on his motorbike. He holds up a trusty leather jacket of his and gives it to a brother. His passing was sudden somewhere in his late teens “ he didn’t suffer and he is now helping people who have passed over from road accidents. He draws my awareness to a grandfather/ mantle clock in the house that needs fixing and says hi to a sister with the ‘S’ initial.

Another son Gregory died in another vehicle accident 5 years before David’s passing. Gregory’s leather jacket was passed to David, and he was wearing it the day he died, which incidentally was Gregory’s birth date. Gregory was 20 when he passed on and, yes, their sister does have an “S” name!

Finally, he mentions the name ‘William’ or Bill who brings in a fatherly vibration, and who is still wearing his hat. He says ‘thank you’ for all the care at the end and talks about a prostate problem. He is still drinking tea and holds up the Union Jack as an English connection. Bill shows me working with horses and shodding their shoes. The dogs are still with him in spirit. His energy is withdrawing as he “thanks for all your care and for putting the hanky in my pocket.”

Spot on – Bill is my father and he always wore a hat! His father was born in England. He loved his pot of tea and his horses and dogs. He always was shoeing the horses, because he wouldn’t ride an unshod horse, because it was unkind to make them go the miles we did on the property barefooted.

Sunny’s reading was incredibly accurate “ so many details correct that he couldn’t possibly have known or guessed.